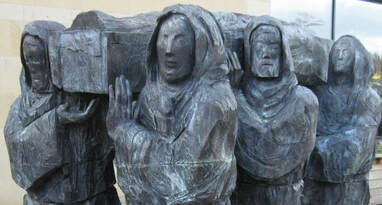 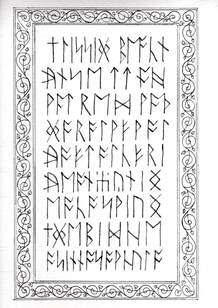 I’m currently working on the third novel of a trilogy based around one of England’s most important saints—Cuthbert.

The first book Heaven in a Wild Flower includes the saint among the cast of characters and therefore is set in the seventh century. The main character who Cuthbert befriends is Aella, a leather-worker and the patriarch of a Northumbrian dynasty destined to be deeply touched by the saint’s life and miracles. Thanks to the saint’s influence on him, Aella transforms from a talented craftsman who works leather into a learned scribe and biographer of his mentor. Heaven in a Wild Flower is due for future release by Next Chapter Publishing.

The second novel is entitled The Horse-thegn and is set in the ninth century. Its main character, Cynn, is an Anglian nobleman whose work as the title suggests is to carry on the family tradition of trading, supplying, breeding and training horses for the king. But Cynn is also a cavalry commander because he lives in times troubled by Viking raids. His brother Galan is one of the seven monks who carry the coffin of St Cuthbert around the land to keep the sacred remains from falling into the Norsemen’s hands. Cynn has the task of confronting a recalcitrant Viking leader who continues to slaughter and devastate in the north whilst other Danes become peaceful settlers. Tracking down and eliminating this merciless foe becomes Cynn’s life work. [The image to the left is the frontispiece of Book 2 and is a runic inscription of the Bewcastle Cross near Carlisle]. If you want to know what it says, you'll have to read the novel when it comes out!

The third novel is an anomaly since it falls slightly outside my preferred Anglo-Saxon period as it begins immediately post-conquest. It is in its early stages but already its two main characters are very different. Kenrick is a descendant of the previous two main characters but he is not warlike. Instead, he wishes to become a master mason and will succeed in building Durham cathedral to house the shrine of Saint Cuthbert. One small spoiler, he is helped in this ambition by Thurgot a shipwrecked traveller saved by Kenrick from drowning. I can say no more for fear of spoiling but also because I don’t know yet…! UPDATE But now I have a title: it's called The Master of the Chevron see the image below to see why. As of 22   June the novel is finished. It's amazing what research can throw up. I didn't know that the chevrons you see below were painted red and black in alternating rows in the early twelfth century: a detail I included in Chapter 18.

Publication dates for all three will be given here as soon as they are known.
.
​ 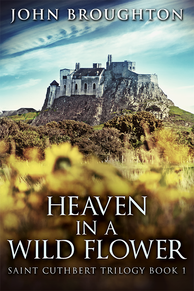 This is the cover for Book 1 of the St Cuthbert Trilogy. As you can see, it depicts Lindisfarne or the Holy Island. I'm delighted with this cover.  Now available
mybook.to/hiawf 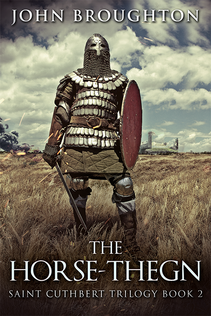 Book 2 of the Saint Cuthbert Trilogy. A wealthy ninth-century thegn ready for battle under the cloudy Northumbrian sky. His men would most likely have worn a metal helm but only leather jerkins to protect them behind their shields.  Now available, click here: mybook.to/horsethegn 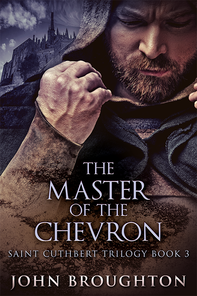 Cover Preview: Book three will be avaoilable soon. Another descendant of Aella becomes a master mason and made Durham cthedral what it is today. Look out here for the release date.