SAXONQUILL
Anglo-Saxon Months
We are used to the Roman month names that go from January to December. But long before these names were adopted into English,  Germanic calendar that had been brought to England from mainland Europe by Anglo-Saxon settlers was used to divide the year into 12 (or sometimes 13) lunar months. The earliest and most detailed account we have of this pre-Christian calendar comes from Bede, an 8th century monk and scholar based in Jarrow in northeast England, who outlined the old Anglo-Saxon months of the year in his work De temporum ratione, or “The Reckoning of Time,” in AD 725.
January, Bede explained, corresponds to an Anglo-Saxon month known as Æftera Geola, or “After Yule”—the month, quite literally, after Christmas.
February was Sōlmōnath, a name that apparently derived from an Old English word for wet sand or mud, sōl; according to Bede, it meant “the month of cakes,” when ritual offerings of savory cakes and loaves of bread would be made to ensure a good year’s harvest. It’s plausible that the name Sōlmōnath might have referred to the cakes’ sandy, gritty texture.
March was Hrēðmonath to the Anglo-Saxons, and was named in honor of a little-known pagan fertility goddess named Hreða, or Rheda. Her name eventually became Lide in some southern dialects of English, and the name Lide or Lide-monthwas still being used locally in parts of southwest England until as recently as the 19th century. April corresponds to the Anglo-Saxon Eostremonath, which took its name from another mysterious pagan deity named Eostre. She is thought to have been a goddess of the dawn who was honored with a festival around the time of the spring equinox, which, according to some accounts, eventuallychanged  into our festival of Easter. Oddly, no account of Eostre is recorded anywhere else outside of Bede’s writings—but it seems unlikely that Bede would have invented a fictitious pagan festival in order to account for a Christian one.
May was Thrimilce, or “the month of three milkings,” when livestock were often so well fed on fresh spring grass that they could be milked three times a day.
June and July were together known as Liða, an Old English word meaning “mild” or “gentle,” which referred to the period of warm, seasonable weather either side of Midsummer. To differentiate between the two, June was sometimes known as Ærraliða, or “before-mild,” and July was Æfteraliða, or “after-mild;” in some years a “leap month” was added to the calendar at the height of the summer, which was Thriliða, or the “third-mild.”
August was Weodmonath or the “plant month.” After that came September, or Hāligmonath, meaning “holy month,” when celebrations and religious festivals would be held to celebrate a successful summer’s crop.
October was Winterfylleth, or the “winter full moon,” because, as Bede explained, winter was said to begin on the first full moon in October.
November was Blōtmonath, or “the month of blood sacrifices.” The purpose of this late autumnal sacrifice might have been propitious, but it’s likely that any older or infirm livestock that seemed unlikely to see out bad weather ahead would be killed both as a stockpile of food, and as an offering for a safe and mild winter.
And December, finally, was Ærra Geola or the month “before Yule,” after which Æftera Geola would come round again.
Use of the Germanic calendar dwindled as Christianity—which brought with it the Roman Julian Calendar—was introduced more widely across England in the Early Middle Ages. It quickly became the standard, so that by the time that Bede was writing he could dismiss the “heathen” Germanic calendar as the product of an “olden time.” 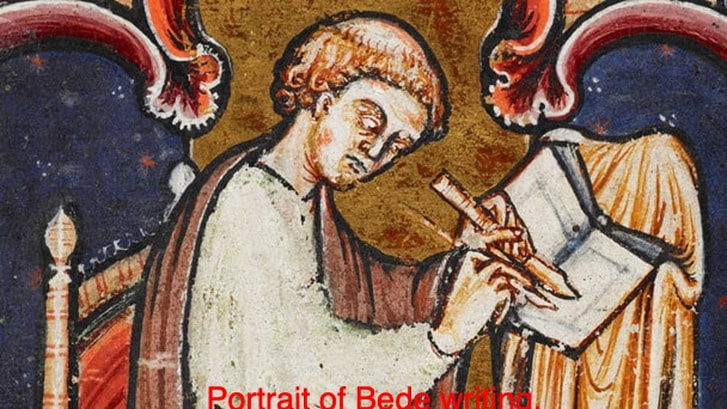